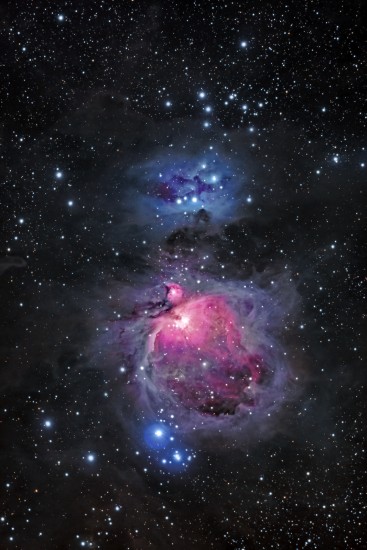 The Orion Nebula and the Running Man Nebula

The Orion Nebula in the constellation of Orion, otherwise known as M42/M43. The Orion Nebula is the brightest nebula visible in the Northern Hemisphere. Even under moderately light polluted skies, the nebula is visible to the naked eye as a faint cloud below the three stars forming Orion's belt, at the tip of the constellation's "sword." In this image, you can also make out the so-called Running Man Nebula, named after its resemblance to a jogger mid-stride. I took this photo with a TMB92L refractor telescope, a Hutech-modified Canon T3i DSLR camera, an Orion SSAG autoguider and 50mm guidescope, all riding on a Celestron AVX mount.